Tarak Mahadi as an artist already is well known for his art work on oil and acrylic! He tends to be a realist artist but that subtle tendency is always been a misnomer! His apparent focus is the centrality wrapped up with a kind of playfulness of abstraction here and there, which interprets the realist psyche of his artistic personae of his subjects philosophically and dialectically!

Tarak is a master craftsman of presentation. He has a kind of story, yet not a story but through deciphering various representative elements that he places on the canvas, this trajectory is non-fictional, the sheer composition adhering his learnt sense of aesthetics, his audiences has room for interpretation and reinterpretation of what he mostly intended to celebrate.


It is well known fact that S M Sultan's admiration of lives of farming community knows no bound, its simplicity is high above the town dwellers! He is the artist gives a huge importance on the lives and the hard labour! Sultan’s paintings are feast for eyes that brought with so much passion and flesh which is Blakesques, but deviates from Blake to a large extend for his themes and ideology transmuting the agrarian world into metaphorical premise! Sultan's exaggerated muscles of rural poor farmer's, which is allegorically showing they are strong entity and backbone of the society. Here again he wanted a forceful images of the farmers to stand ideologically against the so called hegemony created by those educated urbanized citizenship. Sultan is aware of this hegemony and the dichotomy of the two contrasting elements of classes and livelihood.
Here in the 'World of Sultan', Tarak's concept is very decipherable. Tarak is well perceived the dichotomy of Sultan’s concept of rural farming people’s simplicity on the one hand and the artificiality of urbane on the other! He depicted Sultan in blue peaceful robe instead of his regular black robe standing in the middle of his own masterpiece, the longest scroll called painting done by his own creation of paint from fruits and barks of Bengal entitled 'Evolution' showing in a suggestive or a hint at the background encircling spirally like fish eye lens shot, behind Sultan's figure. The figure is holding a crystal ball symbolizing his principle of his ideology.
As if it's the moot point? As to find an argument where poor farming people with exaggerated muscle with tremendously voluptuous farmers that Sultan idolizes will remain here to stay against that Urbanity deviates from the green heritage and simplicity of rural profundity. Tarak knows his form and content and exhibits in an envious style not posing it merely as a painting but something even more to it, he brings his audience into a premise of ideology of Sultan. However it may sound his idiosyncrasy of Sultan, yet Sultan’s adoration of philosophy of rural agrarian power over the cityscape is amazingly put as the prime focus of his tableaux. Writing reviews on Arts and films in Bengali and English dailies for ages, I have not seen any artist delved with such intense subject matter as Tarak did in ‘The world of Sultan’, bringing his generation to interact with our enigmatic precursor of arts of Bengal, guru Sultan and critiquing him and establishing his powerful ideology that transformed Bengali art scene so tremendously. Tarak shares the same joy rekindling the passion of Sultan nonetheless being an artist of a new generation. In our contemporary art history, what I believe this dialectical piece of painting as quintessential, as an epitome of trend breaking subject matter remains to inspire and lead the new approach of paintings.

In depicting Sultan's ideology of agrarian society above all, the national premise, Tarak composed a montage, a very dialectic approach indeed! in a crystal ball Sultan himself holding it firmly, where predominant image of his master piece known as 'Adam Surat' for which the English title is 'The First Plantation' in a miniaturesque craftsmanship on the top while the suggestive cityscape is upside down. High above the figure of artist Sultan the spherical open space in blue Tarak brings life ethereal, fluidity, life like vapour ascending vertically upwards. Here it refers being a realist painter I find here he projects his insight here with a kind of abstraction to draw sultan as powerful spirit, as giving him a saintly attribution.

Tarak interestingly sculpted well thought out crystal ball, showing the contrasting elements--the symbolic farmer Adam, who is in fact the first farmer who planted on this mother plant after being He and Eve were thrown out of the Garden of Eden as punishment for having eaten from the Tree of Knowledge of Good and Evil or forbidden fruit, Genesis 3:22-23! Here it should be mentioned the Sultan's The First Plantation was shown in the exhibition along with so many rare works which are not found anymore, where he participated in the exhibition at Victoria Embankment, Hampstead, in London along with Picasso, Salvador Dali, George Braque, Paul Klee & many other renowned artists in the early sixties.

If you bring all the paintings together but this piece of work stands as core of his psyche of a rare accomplishment to strengthened his ideology of green agrarian world bringing the first farmer who pave the way of farming on this terrestrial plain is nobody but Adam. Here Tarak chosen rightfully the right iconic Sultaneques masterpiece to affirm his premise of first civilized being to ornate the beginning of the great agrarian civilization! Iconised and blessed by the two angels surround him above his shoulders.
Posted by Kanak Ashraf at 12:08 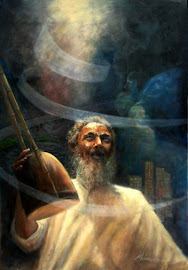 Essence of Portraits by- Tarak Mahdi 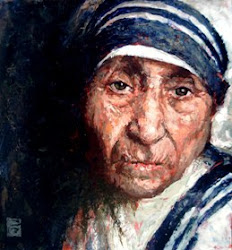 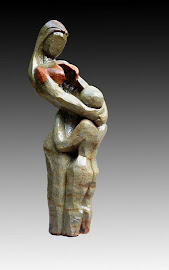 
Standing on the path of time as if unlimited indifferent different example like an active symbol, passed away more then hundred years just like a mysterious bridge with the future & the existing past.(HUMAN)
--------------Tarak Mahadi, 2010